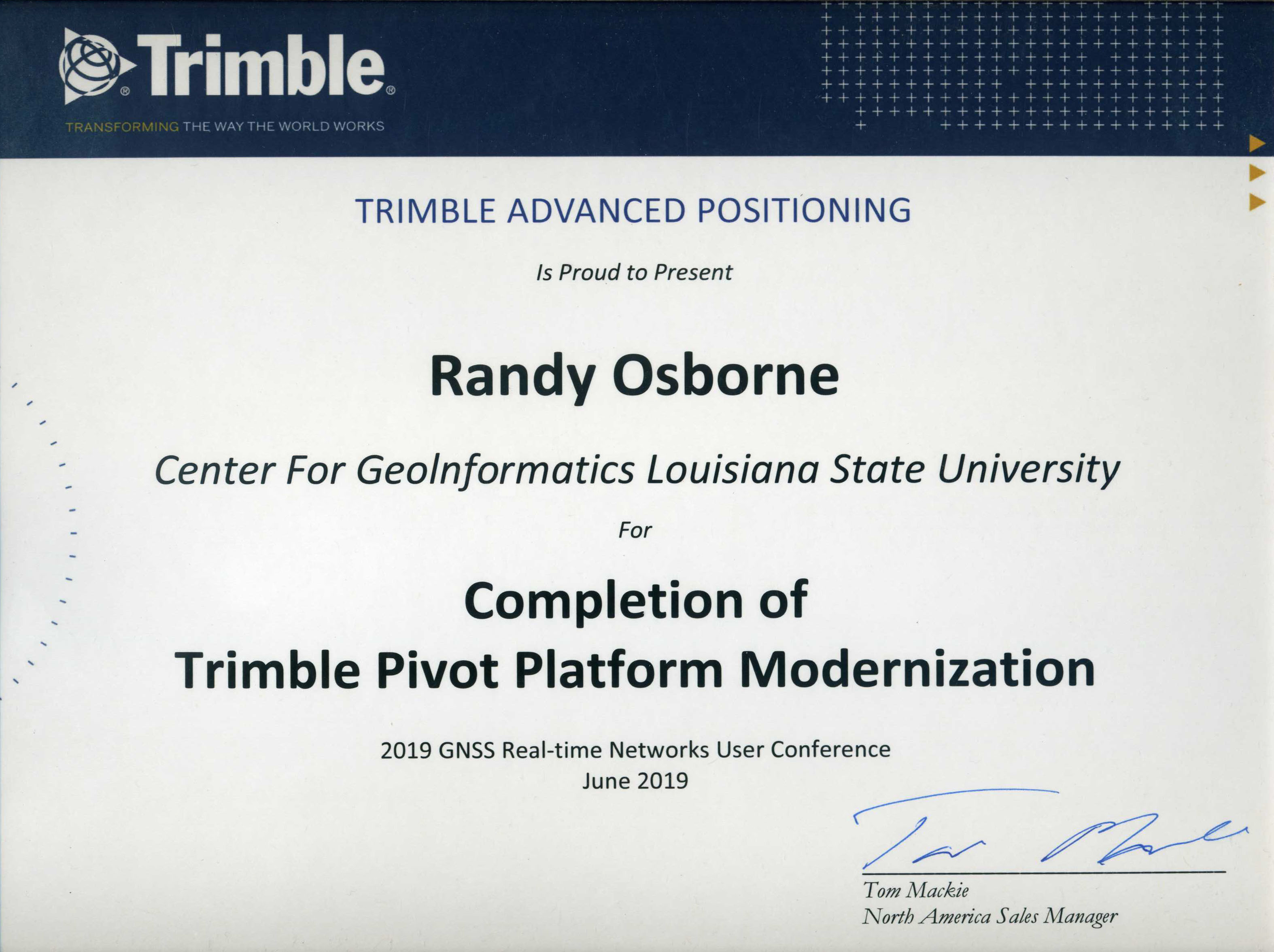 At the Trimble Real-Time Networks User Conference in Columbus, Ohio, this past June, Randy Osborne, network manager, received a certificate recognizing the LSU Center for GeoInformatics’ real-time network. This certificate recognized the efforts C4G made to modernize the network, implementing the latest Trimble Alloy GNSS reference receivers and taking advantage of the applications made available through the Trimble Pivot Platform. “The LSU team has invested a great deal of time into ensuring their network provides the absolute best products to its GIS, agricultural and surveyor users,” said Alex Ngu, technical sales engineer at Trimble Real-Time Networks. “Their commitment to hosting a completely modern network will provide countless benefits to the work they and their users are conducting.”

The Center for GeoInformatics (C4G) deploys and maintains a statewide network of continuously operating reference stations (CORS) used for advanced positioning and subsidence monitoring throughout Louisiana. In partnerships with neighboring states along the Gulf Coast, C4G provides continuous raw data from select CORS for height modernization to improve the National Geodetic Survey’s National Spatial Reference System. This Gulf Coast-wide network of CORS is the foundation of GULFnet and the raw data from all of these CORS are distributed free of charge to the public. A subset of GULFnet CORS is also distributed to NGS for use in their NOAA CORS program which uses this data to produce OPUS solutions throughout the Gulf Coast Region. C4G uses highly specialized software developed by Trimble to provide many value-added services to subscribers, one of which is known as the C4Gnet Real-Time Network.  C4Gnet Real-Time Network provides advanced positioning solutions to subscribers for a wide variety of applications in Real-Time and C4G is committed to providing these services at the highest possible level.

BATON ROUGE – LSU Center for Geoinformatics Surveyor J. Anthony Cavell was installed as President of the National Society of Professional Surveyors, or NSPS. NSPS was incorporated in 1990 and succeeds the American Congress on Surveying and Mapping, or ACSM, which was inaugurated in 1941.

Cavell is a Fellow of NSPS and of ACSM. Additionally, he has been active in the AACSM and the Louisiana Society of Professional Surveyors, or LSPS, since 1984. He has served in several capacities as officer, director, committee chairman and educator/trainer.

A Professional Land Surveyor, he was licensed by the Louisiana Professional Engineering and Land Surveying Board, or LAPELS, in 1990. LAPELS also approved him as a Professional Development Provider in 2004. In 2007, he became a Certified Federal Surveyor as a member of the program’s initial class. He was one of the initial class of Trimble Certified Trainers (Trimble Navigation, Inc. is a manufacturer of GNSS and surveying products).

Some of his notable contributions include development of an improved plane projection for the Kingdom of Saudi Arabia in 1995, writing calibration procedures for the STARFIX navigation system relative to the Global Positioning System, or GPS, in 1990. He supervised Quality Assurance surveys for the Aerial Light Detection and Ranging, or LiDAR, for the Watershed IV Joint Venture with the Federal FEMA that covered the state of Louisiana in 2003. Cavell contributed to the successful establishment of the network of Global Navigation Satellite System, or GNSS, receivers across Louisiana and the Gulf Coast known as GULFnet or C4Gnet that now numbers over 110 stations. At the Center for Geoinformatics (C4G) he participated in the Accuracy Assessment of a Regional LiDAR Digital Elevation Model using a RTN, covering Louisiana.

Cavell is currently the resident surveyor at the LSU C4G where he began in 2004 as associate director. He left for private practice but returned to C4G following the death of Dr. Roy Dokka, C4G’s founder and director. In addition to his almost 40 years in the field of surveying, he has developed professional development seminars, written articles in professional magazines.

He is part of exciting new research at LSU C4G including a project attempting to better define the Geoid model for Louisiana with hopes of expanding to the Gulf Coast. The Geoid is an invisible surface that has the same gravity potential on every part of that surface. The potential identified with a zero height has a gravity potential that is a best fit for what has been called Mean Sea Level.

C4G & Cavell are using a sophisticated gravimeter (super sensitive spring scale) to visit identified points (mostly benchmarks). At one of those points, several different measurements are taken including gravity, conventional leveling, GNSS and, when possible, tide readings. A successful result will permit areas within Louisiana and hopefully soon the Gulf Coast with the tools necessary to quickly and regularly determine tectonic movement, subsidence, sea level rise and better plan and respond to natural changes and emergencies.

In addition to his contributions through projects, Cavell continuously strives to educate the public about the breadth of the surveying profession, its history, the dependence society has on it, and the dangers of assuming robots or numbers from measurements are exact. His achievements have earned him honors including the 2007 ACSM Earle J. Fennel Award which he was recognized for Contributions to Surveying and Mapping Education.

LSU Center for GeoInformatics(C4G) in partnership with the Space & Earth Geodetic Analysis Laboratory (SEGAL) at the Universidade de Beira Interior (UBI) and Instituto Dom Luis (IDL), Portugal will provides a framework for advancing geodetic analysis and modeling. Combining the skills and experiences from these of capable and motivated partners will lead to new opportunities that were previously inaccessible.

The partners will collaboratively pursue research and support for the precise point positioning of GPS/GNSS data, gravimetric geoid modeling, and the application of emerging geo-informatics technologies and services. C4G and SEGAL will develop new tools for analyzing Global Navigation and Satellite Systems (GNSS) data. Long term collaboration will also advance the development of a new gravimetric geoid model for Louisiana.

“Subsidence is a leading cause, if not the principal driver of wetlands losses in Louisiana,”
- C4G researcher Joshua Kent.

“Gravimetric surveys conducted by the C4G will ultimately allow us to re-connect with the geoid to calculate better elevations" and “knowing how high we are above sea level.”
-  C4G geodesist Cliff Mugnier.

“We have applied our in-house developed software in the computation of regional and national geoid projects in North Mozambique, Madeira and more recently in Bhutan.”
- Machiel Bos, SEGAL researcher

“This collaboration is a unique opportunity to partner with a very enthusiastic team that combines pure and applied research in several areas of geosciences with enormous societal implications,”
- Rui Fernandes, of SEGAL.

“I anticipate significant innovation from our relationship.”
- George Z. Voyiadjis, Boyd Professor and Director of C4G

LSU Remains Committed to the Success and Expansion of C4G

In 2001, LSU’s College of Engineering created a Center for GeoInformatics (C4G) to build new research and services in Geodesy and GeoInformatics. Over the past ten years, LSU’s C4G has been instrumental to the State of Louisiana; and exposure provided by the Center’s data has offered critical information for infrastructure elevation and roadway assessment.

Professor and Researcher Roy K. Dokka, Ph.D., was the founding executive director of LSU’s C4G and was also director, Louisiana Spatial Reference Center (LSRC); and holder of the Fruehan Family Professorship in engineering at LSU. The LSU community lost one of its most dedicated research and faculty members when Dokka passed away on Monday, August 1, 2011, at his residence in St. Francisville, La. He was 59 years old.

Dokka and C4G’s research interests centered on the application of the Global Positioning System (GPS) and geodetic leveling to study the massive subsidence that is affecting Louisiana’s coast and midcontinent, and on understanding the role that tectonism and climate play in creating landscapes.

In 2002, Dokka initiated the LSRC, a partnership with the National Geodetic Survey-NOAA, focused on creating a state-of-the-art positional infrastructure for the state. NGS' National Spatial Reference System (NSRS), provides the foundation for transportation, communication; mapping and charting; and a multitude of scientific, engineering, and agricultural applications in Louisiana.

Dokka ‘s vision for C4G provided a solid foundation by establishing a statewide network of Continuously Operating Reference Stations (CORS), and then worked with state legislation to make the CORS network a vertical control standard for the State of Louisiana. This infrastructure is the backbone for surveying in Louisiana, as well as supporting all GIS development, detailed topographic mapping, precision farming, navigation, and other geospatial applications.

By implementing a Real-Time Network (RTN) on this CORS infrastructure, Dokka created GULFNet as a way for subscribers to tie into the NSRS and enjoy a virtual zero-length baseline to this Vertical Geodetic Control throughout the State of Louisiana. GULFNet uses the entire network of more than 60 GPS receivers to compute necessary atmospheric corrections for a subscribed rovers' position and deliver them directly to the GULFNet subscriber in real-time within the 3D error space of a golf ball.

LSU and the College of Engineering recognize that the service provided by C4G is critical to the State, and is looking at C4G’s business plan to ensure that the stability and sustainability of the center’s services continues and expands in the near term. In addition, the College will provide leadership to build C4G’s research component as a complement to its existing service component.

Given the timeliness and current opportunities about GeoInformatics within areas of research and involvement to provide critical information for infrastructure elevation and roadway assessment, LSU’s C4G will continue to be a valuable asset for government, industry and higher education. Serious consideration to C4G’s expansion plans will focus on advantages and the impact to be a leading research area for the College and University in the Gulf Coast Region.

The LSU College of Engineering has a clear understanding with C4G’s constituents and partners, as well as a definitive commitment to continued success and expansion.